When you have mustered the courage to crack Russia’s greatest cultural crucible, it is advisable to be readily armed with a tale or two to share with your unclothed comrades.

You see, despite the many novels, poems, and sonnets that have been penned over the years centered on Russia’s crowning gem, in reality it’s just a hot room that you sit in and sweat.  It’s the conversation that makes the experience delightful.  As the temperature soars, somehow even the most banal of conversation takes on new meaning as you summon the strength to gasp out your thoughts, one painful phrase at a time.

And the best kind of story to tell in a banya is a story about being in a banya.  Naturally, this will be impossible in your first trip to the banya, so try to do something memorable to talk about the next time.  If you have no good stories, then learn a few good Russian anecdotes.  After all, no one wants to sit quietly in a banya.  That’s just weird.

One of my life dreams came true last summer when we moved to a house with our very own banya.  I guess, in a sense, it was also a letdown.  A letdown in the same way that Tamerlane felt disappointed after conquering China, because there was no nation left worthy of conquer.

But just the other night, something special happened in my banya- I got another banya story that I will now inevitably tell every time I go to the banya.

Here is what happened:  my friend Igor offered to heat up the banya.  Here is a picture of Igor later on that same evening: 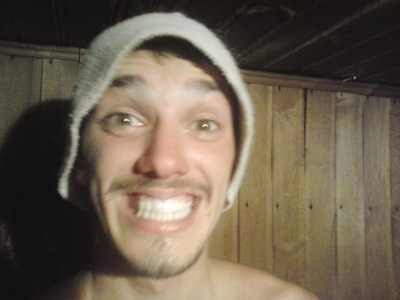 Igor had been at my house a few weeks ago when I was out of town and heated up the banya for some friends.  I asked Igor how hot he managed to heat the banya.  He replied, “Oh about 90 degrees (celsius)”.

A few hours later, Igor casually mentioned that the banya was ready.  I called my three trusty male descendants, and we trooped out to our handy steam house.  Now when we arrived, I felt that the temperature was a bit higher than normal.

I know you want a number.  You want to know the temperature.  I’m not going to tell you.  I will just say that it was so hot that I had goose bumps all over my body and there was no sweat.  That was a first.  “Perhaps your sweat is immediately evaporating,” Igor helpfully offered.  I didn’t know what to do about that, because I have this banya theory that in your first visit (each banya trip involves multiple visits to the steam room alternated with conversation outside in the yard during rest breaks) you must break a sweat.

I was confounded by the lack of sweat, and since my head was spinning a bit, we exited for a rest break after some minutes.  You probably want to know what the temperature was.  Not going to tell you.  I’m just going to say that when we came back in, it was 116 degrees Centigrade,  and I kid you not, my boys started complaining that it felt cold.  I guess that everything is found in comparisons.  And when my boys started griping about how it felt cold, and it was actually that hot, I felt some strange kind of pride.

You’re probably still wondering how hot it was.  I’m not going to say.  All I will do is show you what happened to the plastic faucet handle in the banya that evening:

So, yes, I am thrilled to have another banya story under my belt to share with my friends as we swing birch branches through the steamy air and spin yarns on steam houses of yore.

Here are a few other of my favorite banya tales:

1) In which it was 100 Celsius inside and -47 outside and the steam on my skin immediately turned to ice.

2) In which I had rented a dacha from a pensioner in the Moscow province.  Some friends from Kamchatka heated it up so hot that the wiring melted, causing a short and putting out the electricity in two houses.

3)  In which my friends and I exited a banya in the forest in the Urals and I suggested we jump in the snow.  I went first, in a state of extreme undress.  My face forward leap through the air abruptly lost some of its grace when my front side learned that the top of the snow was a layer of ice.

What is your favorite banya story?  That’s what the comment section is for.