Maybe your life journey took a left turn, and now you’re googling “how to get a driver’s license in Russia”.

In my case, I had already been living on a visa in Russia for 10 years, and had thus simply been using my American driver’s license.

But to obtain the Russian driver’s license, I first had to go through driver’s ed.  I scoffed at the idea at first.  I mean, I had a lot of driving experience, and had been driving in Russia for 10 years.  But I quickly learned that Russian driving school is no laughing matter.  Because Russian driver’s ed prepares you for an exam of 20 random questions (chosen out of 800 total questions that you must know the answers to), and any more than two mistakes on the 20 questions (in Russian, of course) would be a fail and require going through the examination process again.

I have taken care to choose sample exam questions that support the view that Americans are simplistic and Russians are complicated.  I also hope, in the spirit of nearly all my blog posts, that the chosen sample questions will create more questions than answers.

As examples for this no-holds-barred standoff, I have used the driver’s exam from the nation of Russia and the State of Ohio.  In America, each state has its own driving rules- which to my Russian friends is absolutely bizarre.

I was recently standing in a line, just as I do for much of my life in Russia.  This particular line was a two-hour line to register and pay for the privilege of proving to a doctor that I’m not a drug addict.  I started chatting with some of my fellow queue occupants, and we began discussing the American driver’s license vs. the Russian driver’s license.  They could not understand why I couldn’t just trade in my American license for a Russian license without going to driver’s ed and going through the examination procedure.  I explained that the driving rules in America are completely different than in Russia.  “For example,” I said, “in America there is no such thing as the main road.” This was a shocking epiphany for my fellow queue comrades, and they immediately asked the obvious question: “Well then, how do you know who has the right of way?”  To which, I replied, “There are signs at all intersections.”  They then looked at each other in awe and repeated, “In America, there are signs at all intersections”.

So, without further ado, I present:

How Many Questions And How What Constitutes A Pass Or Fail:

In Ohio, I don’t know the total number of possible questions, but you will also be also asked a total of 20 questions.  If you answer more than 5 wrong you are a FAILURE.

Can You Take The Test In A Foreign Language?:

In America, yes you can.

Round 1:  “Not Being Blind vs. Reinforcing Stereotypes”

Please remember, if you get this question wrong, you only get four more mistakes. I am reminded of a few years back when I had to take the Ohio driver’s license test and there was a teenage girl taking the test next to me.  She was clearly distraught and kept on moaning while saying over and over, “I just don’t know…”. 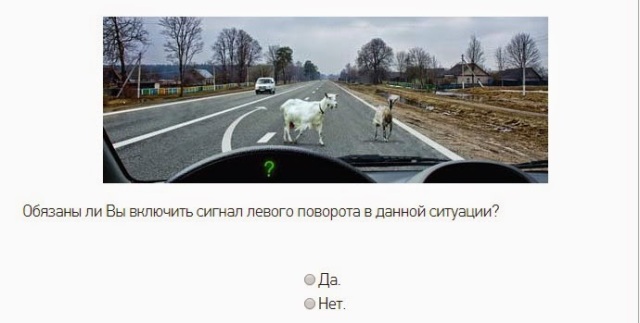 Are you required to turn on your left hand turn signal in this situation?  Yes or no?  Ok, ok, I mainly chose this question because it included a picture of some goats.

Round 2: “Which Headlights To Use vs. How To Yield”

If you got this one wrong, you only get three more wrong answers.

You are planning to continue driving straight.  Who should you yield the road to?  a) Only the car. b)Only the bus and the car.  c) All other vehicles.

“C” is marked as the answer and it is the wrong answer.  You only get one more mistake out of 20.

Round 3:  “Avoiding Blindness vs. Understanding the Policeman’s Signal”.

Congratulations.  If you answered this question correctly, you have avoided a temporary sight impairment.

I couldn’t be more delighted to inform you that the correct answer is “a”.

In Russia, #2 is socially acceptable. 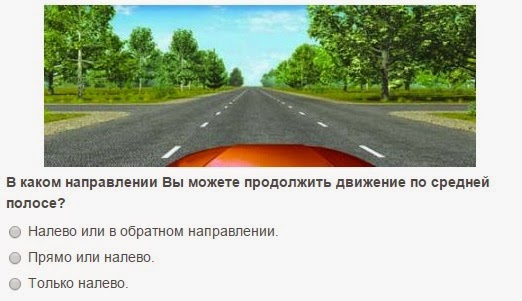 In which direction can you can continue driving from the middle lane?  a) Left or a u-turn.  b) Straight or to the left.  c) Only to the left.

I think the right answer is “a”, but I deleted numerous mental files after completing my Russian driver’s ed program and passing the test with no mistakes.

Round 5:  “Avoiding Death vs. Helping Others Avoid Death”.

May I once again remind you that if you got this one wrong, you still get a few more chances?  I mean, if you don’t die.

What should you do first to administer aid to an accident victim who is lying on the ground without visible injuries, but in an unconscious state?  a) Put some cotton dipped in ammonia under their nose, lift their head and allow them to sniff.  b) Put some material under their legs and urgently call an ambulance.  c) Tilt their had back, open their mouth, if necessary clear their mouth of any foreign objects, check their pulse and breathing, urgently call an ambulance.

I do love the fact that the Russian driving test almost always has first aid questions.  It really makes sense, and could be particularly helpful if you are sharing the road with an American that got the answer wrong on their question in Round 5.

Did you keep score?

Who won?  Whose Driver’s License Exam should be the world standard?  Whose drivers would you be more afraid to share the road with?  Do you see why Americans driving in Russia should learn the rules?

Perpetual Income 365 Is Created For Newbies To Set Up Their Affiliate Marketing System To Run In Minutes! Created By A 7-figure Affiliate In The Biz-opp Space!